The Lewy Lean and How We Reduced It 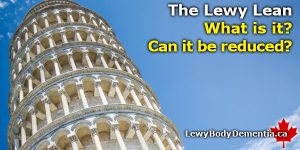 Dementia with Lewy Bodies is accompanied by many unexpected symptoms and allied complications, and posture problems are very common. In addition, fluctuations in digestion, swallowing, voiding, heart rate, blood pressure, and many physical aspects can occur at any time, added to numerous cognitive, psychiatric and behavioural elements.

One issue that seems to be rarely discussed is what is often called the “Lewy Lean.” This is a tendency to lean from the waist, sideways or forwards, or both, sometimes with a slight rotation. In our particular case, it was both, but it was the sideways lean that posed unique challenges.

The risks were to increased falls, as well as discomfort, and additional problems getting through doors, and coming to a standing position, since balance is significantly affected.

I am neither a doctor nor a neurologist, but after many years as an advocate and educator for Lewy Body Dementia, and administering international groups with tens of thousands of participants, I see inquiries about the Lewy Lean very frequently. Given the risks involved, I feel it needs to be actively observed and managed the best possible. This requires significant attention, but may bring significant benefit, or at least reduction of severity or progression.

What we did to lessen the Lewy Lean

What we did was to frequently — almost constantly — reposition the person, while seated, or when sleeping. This needed to be done very gently, and incrementally. We tried to keep their position as straight as possible, and used pillows of various sizes and shapes to help accomplish this. It was not a perfect solution, but with regular, small, gentle adjustments, it seemed we were able to diminish the expression of this symptom, and its impact.

Remaining as active as possible also seemed to help. Stretching, and exercises, with initial guidance from a knowledgeable occupational, or physical, therapist can likely help as well.

Additional care and attention is required for anyone who is still mobile, since the potential for falls and trauma from them are significantly increased. Even though the lower body compensated somewhat to balance out the lean, it was never risk free.

Always check with your specialist to see if there’s anything further that can be done to lessen the impact of the Lewy Lean, including dopaminergic medications. It is also worth investigating whether there are any other medical advances or assistive devices to help. Physical Therapists and Occupational Therapists may be able to recommend something beneficial.

This so-called Lewy Lean in those with LBD has marked similarities to Pisa Syndrome in other conditions, including Multiple System Atrophy. Some refer to MSA as an allied condition on the Lewy Body “spectrum.”

This leaning problem is quite common in Parkinson’s Disease, with one source citing it being present in 8.8% of cases, and appears to be connected to dyskinesia.

There are several reports of Pisa Syndrome being caused by a neuroleptic reaction to anti-psychotic drugs, of which traditional ones are frequently associated with severe and catastrophic outcomes in persons with LBD, and should not be administered.

Doing whatever is possible to reduce the lean, to avoid its expression as a result of medications, as well as actively investigating the potential for treatment and assistive options is well warranted.

Strength and courage to all.
Timothy Hudson

The Journal of Neurology, Neurosurgery and Psychiatry has a related article, which is much more scientific and not in plain language, but has case studies of three individuals, and is Parkinson’s Disease specific. It includes the following: “Dystonic lateroflexion of the trunk, also referred to as Pisa syndrome, pleurothotonus or a lean to the side, was originally described in association with prior exposure to neuroleptics. However, axial deformities (Pisa syndrome, camptocormia and antecollis) are also well recognised but poorly understood features of multiple system atrophy or late-stage Parkinson’s disease.”

Movement Disorders, a journal of The International Parkinson and Movement Disorder Society published research in 2016 that stated, “Pisa syndrome was first described in 1972 in patients treated with neuroleptics. Since 2003, when it was first reported in patients with Parkinson’s disease (PD), Pisa syndrome has progressively drawn the attention of clinicians and researchers. Although emerging evidence has partially clarified its prevalence and pathophysiology, the current debate revolves around diagnostic criteria and assessment and the effectiveness of pharmacological, surgical, and rehabilitative approaches. Contrary to initial thought, Pisa syndrome is common among PD patients, with an estimated prevalence of 8.8% according to a large survey. Furthermore, it is associated with the following specific patient features: more severe motor phenotype, ongoing combined pharmacological treatment with levodopa and dopamine agonists, gait disorders, and such comorbidities as osteoporosis and arthrosis. The present literature on treatment outcomes is scant, and the uneven effectiveness of specific treatments has produced conflicting results. This might be because of the limited knowledge of Pisa syndrome pathophysiology and its variable clinical presentation, which further complicates designing randomized clinical trials on this condition. However, because some forms of Pisa syndrome are potentially reversible, there is growing consensus on the importance of its early recognition and the importance of pharmacological adjustment and rehabilitation.”

BMC Neurology has an article of a single case which appeared to be caused by the change of Cholinesterase Inhibitor type medication from Donepezil to Galantamine, but which resolved when the latter was stopped. From this article, “Pisa syndrome (PS) is characterized by an abnormally sustained posture, with flexion of the body and head to one side and slight rotation of the trunk. Although PS most commonly arises as an adverse effect of antipsychotic drugs, choline-esterase inhibitors (ChEIs) are also sometimes known to induce PS. Despite the fact that the precise mechanism remains unclear, cholinergic-dopaminergic imbalance has been considered as a possible pathophysiologic mechanism underlying the genesis of PS.”