This Lewy Body Dementia (LBD) website was started for several reasons. Primarily, it is to create an actively curated, non-affiliated source of information for anyone affected by Dementia with Lewy Bodies. I started it to help caregivers better cope with the many tragedies of condition and to learn ways to make things the best they can be, under the circumstances. It will also help maintain the health of all caregivers and their loved ones.

The overall approach has been defined from many years I’ve directed the communications and marketing team for North America’s largest University Faculty, in Canada’s third biggest University. My goal has always been to make complicated concepts easier to understand. I apply the same approach here, based on decades of experience as a professional in both creative and technical roles. 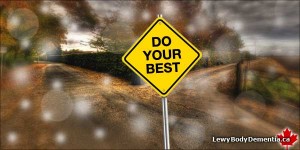 I’ve geared this site to be welcoming and helpful to all, and particularly to seniors and those who are not “digital natives.” Too often, websites have a bias towards more experienced users, with faster internet connections, newer computers, and to those who are comfortable with newer technology. I am going to try to keep this site very simple, very fast, very clear, and with information that can be used by as many people as possible, wherever they are.

I am so very thankful to live in Canada, and the website will come from a Canadian perspective, but the information is always applicable worldwide. My hope is that collectively, we will all be able to raise awareness globally: as it is, dementia is sadly underrepresented in both public awareness and in political policy. We need to talk about it in an informed manner, and without the stigmas, and fear, shame, misunderstandings, and difficulty of the topic.

I write and produce every word, aspect and element of this website (except two, so far, and both are attributed to their respective authors). There is no source of funding whatsoever. Everything is paid for by me, personally. The content is mine alone, although inspiration and ideas come from disparate sources: I do not claim that it is in any way perfect, but it is 100% genuine.

The perspectives I present are based on my personal experiences as a seven-day-a-week carer for a parent with Lewy Body Dementia over a period of several years. I’ve been highly active in local associations and am highly engaged on social media. I’ve had years in the LBD trenches caring for my Loved One. She was diagnosed in 2008, and did remarkably well despite the ravages of the condition, until a very sudden crisis occurred: a “silent” pneumonia from which she could not recover, landing her in the ER, then the ICU, and spending her last moments surrounded by her loving family on August 3, 2016. Grace fulfilled, but missed always.

Here’s to making the journey a little less dark. And towards a lessening of the terrible costs of Lewy Body Dementia: to the individuals who are assaulted by it, to those that care for them, and to the societal and health-care costs it brings.