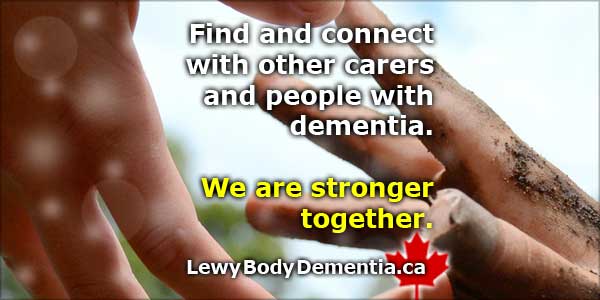 Support Is Not An Option. It’s Essential!

Whether you are a carer of a loved one with Lewy Body Dementia or someone with the condition, there is help available. Don’t delay — get connected immediately. The four supports that have been most profound and effective for me have been:

I participated in an in-person support group in Toronto, and despite that being absolutely great, online groups surpassed it for me with their vast membership, daily “affirmations,” broad knowledge — and almost-instant feedback on every topic, with lots of participation from every part of the world, at any time of day. There is nothing else comparable. It’s an avenue I did not expect to be beneficial, but is by far the best resource I have ever found.

My favourite 24-7 online support groups are on Facebook. The members are real people, in the thick of things. The information can be raw and emotional. Nevertheless, I have found it to be an unbeatable source of information, camaraderie and compassion.

These groups are easy to join. You will just need to have a typical Facebook profile, and answer a couple of simple questions to be accepted. It is not as intimidating as you might think, and you can join and just see what people are saying. You do not have to actively participate, although that is the best part, in my view. I highly recommend joining.

I suggest you start with one or both of these Facebook groups first: Lewy Body Dementia Carers and Lewy Body Support Group: they have the largest and most active membership that I’ve found so far. I personally co-administrator both of these groups. They’re “closed” groups: only members of the group can see what’s written. This makes it much more private than typical groups on FaceBook. Keep in mind, however, that anything on social media has the potential to be seen by others, so exercise good judgement when posting — you never know for certain who may see it.

If you have LBD yourself, and seek a group of others with the condition, the Living With Lewy Facebook group may be perfect. This group is not for carers, although I am a moderator there).

For spouses, the LBD Caring Spouses group run by Rosemary Gerber-Dawson, Jeff Maruna and Pat Snyder should be explored.  It’s email-based, so you don’t need to join Facebook. Since so many care partners are married to the person with LBD, this is an excellent resource, and has over 1,000 participants as of June 2019. As a members-only group, you have to sign up to view or participate in the discussions.

I have learned an incredible amount of information, have broadened my understanding of the enormous variations of the condition and differences in progression by participating in a Lewy Body Dementia support group.

More than anything, I have learned how extremely compassionate and caring people are and what great strength they have found within themselves. It has been a very humbling, and inspiring experience and continues to motivate me. The Lewy Body Dementia Association (LBDA) has a support-group-locator tool for North America.

I joined my group by contacting my local Alzheimer’s Association. If you live in a smaller centre or a rural area, the online groups might be easier to access.

Don’t delay in making contact — face-to-face support groups typically have long waiting lists, the sooner you contact them, the sooner you’ll get that benefit.

There is a growing availability of “virtual” support groups as well, where it’s by teleconference using computers or telephones, which are more viable in less populated areas. The technology is rapidly improving, and there is increased interest and adoption of this method, which has the added benefit of direct connections without having to travel, as this article on carer-teleconferencing discusses.

The Associations for Lewy Body Dementia has phone support (800-539-9767), as do those for Alzheimer’s and Parkinson’s. Depending on what kind of information you need, each one of those may provide a component of the answer you seek. All are fantastic!

Strength to you!
Timothy Hudson