The continuum and progression of Lewy Body Dementia symptoms is difficult to predict, but has some significant consistency that applies to many people and may help with planning.

(If you need to, jump straight down the page to the potential phases/stages section.) 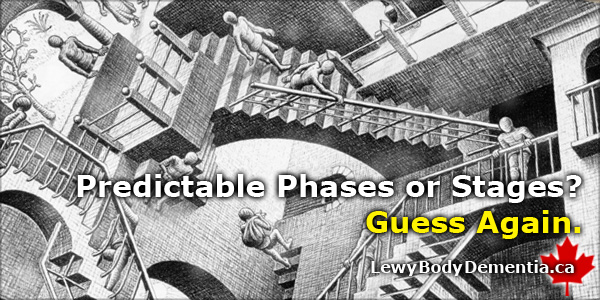 I’m no fan of applying the concept of “stages” or “phases” to predict the trajectory of a person with Lewy Body Dementia . I’ve witnessed far, far too much variation. Precipitous drops. Miraculous recoveries. Dizzying variations. I consider it a continuum. And not a linear one.

So I never apply stages, phases or expectations. The only one I knew for certain, was the very end. The rest was a wild ride indeed.

But there’s a constant desire by people desperate for answers, for a clue to where they’re going, what’s next, how to plan or just get by. And for that reason, I present the best one I’ve found.

I defer to the exceptional work of an exceptionally resourceful and committed duo, Sue Lewis and June Christensen, who exhaustively compiled the document based on input from approximately 300 members of an online group called Lewy Body Caring Spouses in 2006.

In my view, this is the best description of a possible sequence, categorized into five groupings of symptoms, which will always have a great deal of overlap.

Keep in mind these categories and their contents are “potential.” Personally, I shy away from the phrase “stage” and use something like earlier or later in the sequence of symptoms, which can fluctuate shockingly. This is a subtle, but important difference to me.

The following piece is based on the discussions and observations of the LBD caring spouses. It is in no way intended to represent research or science. It is developed as a very broad framework to refer to. But, “to be forewarned is to be forearmed.”

The phases have no specific time frame. Due to the fluctuations of the disease, the phases are not linear. Instead, phases tend to “ebb and flow” or subtly appear. Symptoms noted in an early phase may be present for the course of the disease. These symptoms may increase in frequency or severity over time. Or not.

In addition, patients that are still “high-functioning” may also show symptoms of Phase III or IV. By no means will a person with LBD display all the symptoms listed in any specific phase. Therefore, each phase is described with “possible” symptoms.

Many commonly used acronyms are used here, which you will likely experience elsewhere as a caregiver. In alphabetical order:

Most caregivers are concerned/worried that something is not right. Symptoms from later stages can also appear this early on the continuum. At the end of this phase, cognitive impairment is difficult to deny.

Symptoms and subtle changes may include:

By this point, most caregivers are worried that something is seriously wrong and seek medical attention. Frequently given an incorrect diagnosis (Alzheimer’s, Multisystem atrophy, Multi-Infarct Dementia, Depression, Parkinson’s Disease).

Symptoms are usually clearer by this point:

Caregiver at high risk for chronic health/joint problems. Self-care is paramount to providing patient care. The needs of the patient require the assistance of a home-health aide/private-duty aide two-to-seven days per week. Increased patient needs may require potential for long-term care placement. Patient may be declared mentally incapacitated. Caregiver may need to explore Hospice services.

Caregiver is actively grieving. Potential for increased caregiver stress. Hospice assistance is strongly suggested. Caregiver will need hands-on support from others to maintain LO at home. Caregiver may need to honor decisions made earlier on the Living Will.

Thanks again for the exceptional work of curators, authors, and caring spouses who compiled the original information — you leave a lasting legacy:

Strength to all!
Timothy Hudson.