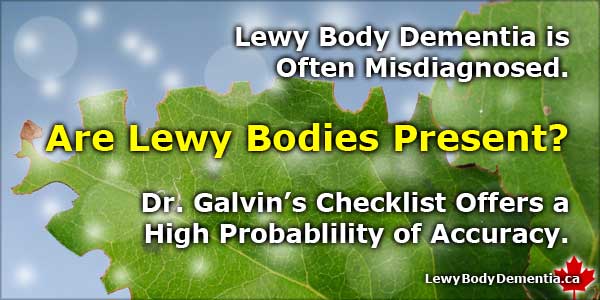 A diagnosis of Dementia with Lewy Bodies should only be done by a qualified professional.

However, a simple checklist for Lewy Body Dementia Diagnosis may help you advocate for a loved one more effectively.  Afterward completing it, when you see your specialist,  you can discuss the results of the test. Mentioning all the specific symptoms they exhibit that are known to commonly accompany the condition.

Exceptional research by James E. Galvin, MD, MPH, led to his publishing of The Lewy Body Composite Risk Score (LBCRS) in Autumn 2015. In it he has created a very simple, ten question test that has incredible accuracy in predicting the likelihood of the presence of Lewy Bodies.

How many of the following have occurred at least three times over the past six months?

1. Slowness in initiating and maintaining movement or have frequent hesitations or pauses during movement?
2. Rigidity (with or without cogwheeling) on passive range of motion in any of the 4 extremities?
3. Loss of postural stability (balance) with or without frequent falls?
4. Tremor at rest in any of the 4 extremities or head?
5. Excessive daytime sleepiness and/or seem drowsy and lethargic when awake?
6. Episodes of illogical thinking or incoherent, random thoughts?
7. Frequent staring spells or periods of blank looks?
8. Visual hallucinations (see things not really there)?
9. Appear to act out his/her dreams (kick, punch, thrash, shout or scream)?
10. Have orthostatic hypotension or other signs of autonomic insufficiency?

Total how many of the above 10 items occurred at least three times during the past six months. If the total is three or more, there is a very high likelihood of the presence of Lewy Bodies. Discuss the results with your medical specialist.

The full article is a must-read. Dr. Galvin elaborates, “A screening test in itself is insufficient to diagnose a dementing disorder. The Lewy Body Composite Risk Score (LBCRS) is, however, quite sensitive to suggesting that there is a high probability that Lewy bodies are a contributing pathology to the underlying cognitive decline either as a single pathology or as a mixed dementia. The LBCRS discriminates DLB, PDD and MCI due to Lewy body disease from other forms of cognitive impairment.”

James E. Galvin, M.D., M.P.H., is Professor of Neurology, Psychiatry and Population Health at the New York University School of Medicine and one of the most prominent neuroscientists in the country. In addition, Dr. Galvin is a professor of clinical biomedical science in Florida Atlantic University’s Charles E. Schmidt College of Medicine and is also a professor in FAU’s Christine E. Lynn College of Nursing.